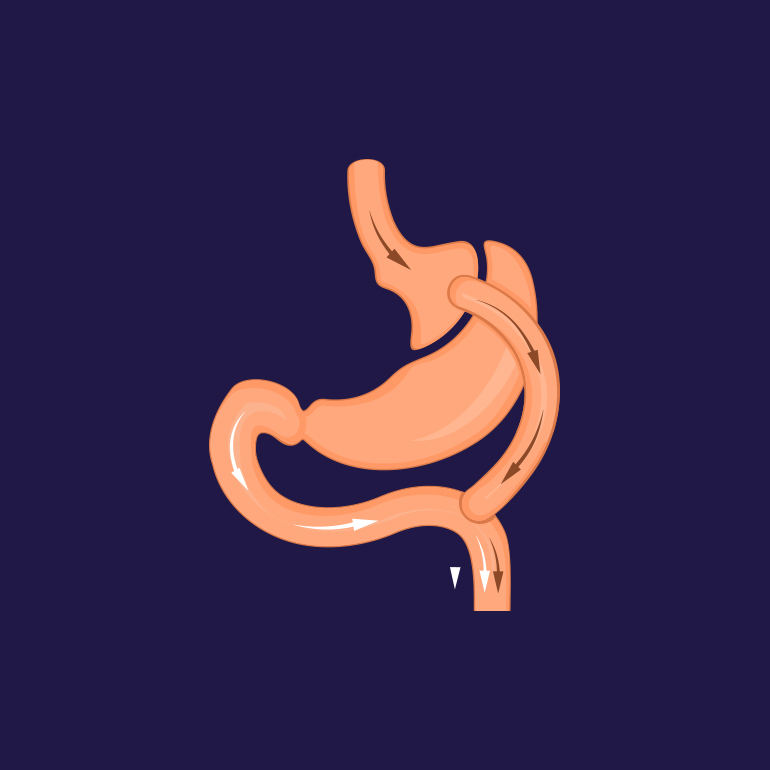 What is the process of Gastric bypass?

Laparoscopic Gastric bypass is one of the most successful and widespread bariatric processes as gastric sleeve. It is one of the effective ways to get rid of both obesity and diabetes.
A pocket is made in the stomach (with the rest of the stomach not removed), and then the it is connected to the small intestine after bypassing the first part of it that is about one and a half meters.
By reducing the size of the stomach, the patient is satisfied with the least amount of food he eats. By bypassing part of the intestine, many nutrients and sugars are not absorbed, which contributes significantly to weight loss as well as cure from Diabetes.

What are the steps of Gastric bypass?

1- The patient is generally anesthesized.
2- The laparoscopic operation is performed through 5 small surgical openings not more than 2 cm long, through which the laparoscopic surgical instruments are inserted, including a front camera that transmits what is going on inside the internal organs to the monitor screen. The surgeon and medical staff follow the process through this screen.
3- After the operation is finished, a leak test is performed to ensure that the operation is safe and there is no leak from the stomach.
4- Surgical openings are stitched cosmetically.
5- The patient moves to the recovery room and from there to the regular room to stay in for one day only, which is one of the advantages of laparoscopic surgery. To learn more about the advantages of the laparoscope in the procedure of surgery,

This statement applies to many obese patients as the stomach has become the organ that causes them a lot of problems and diseases. Obesity has also become the origin of many organic diseases that affect many organs of the body such as diabetes, high blood pressure, high cholesterol, bone and joint diseases, heart disease and others.
Therefore, Bariatric surgeries, which make some changes to the stomach to get rid of obesity and its tiring complications, appeared  to return the stomach to its basic size before its expansion due to the wrong eating habits and overeating.

Who is the best candidate for Gastric bypass?

Which is better for diabetics... Gastric sleeve or Gastric bypass?

Gastric bypass is the ideal process for obese patients with type 2 diabetes that is not dependent on insulin. Scientific studies and patient experience have shown that it heals from diabetes by 98%.
A few days after the operation, the patient is impressed by the low blood sugar level and gets rid of diabetes medications after consulting a doctor.
Gastric Bypass also helps insulin-dependent diabetics reduce insulin doses and sometimes switch to tablets instead of insulin.
It also avoids serious diabetic complications on all organs of the body such as blindness and circulatory problems

How does the Gastric bypass cure diabetes?

What's the difference between Gastric Sleeve and Gastric Bypass?

Here are 4 differences between them:
1- Gastric Sleeve in which about 80% of the size of the stomach is cut and therefore the amount of eating leading to satiety decreases.
In Gastric Bypass, the same percentage of the stomach is cut off and the rest is connected to the small intestine after exceeding the first part of it and thus reduces the amount of food required for satiety as well as reducing absorption of sugars and nutrients. In both processes, the part of the stomach responsible for the secretion of the hormone ghrelin is eliminated and therefore the feeling of hunger is completely reduced.
2- Gastric sleeve cures from type 2 diabetes by about 70%, while the percentage of healing after Gastric Bypass reaches 98%.
3- It is necessary to take vitamins after Gastric Sleeve for a few months, but in the case of Gastric Bypass, it is necessary to take them for a period of 3-5 years depending on the case. This is to compensate for vitamin deficiencies resulting from reduced absorption.
4- The Gastric Sleeve is suitable for lovers of eating in large quantities while the Gastric Sleeve is more suitable for sugars and sweets lovers.

1- It is a completely safe process to get rid of obesity.
2- It is done by laparoscopy which achieves great advantages for the patient, the most important of which is the lack of pain after the operation.
3- Get rid of the painful complications of obesity such as Hypertension, diabetes and bone diseases.
4- Recovery from type 2 diabetes.
5- Suitable for all degrees of obesity and different weights.
6- Do not involve inserting a foreign object or removing part of the stomach.
7- One of the oldest bariatric processes that achieves excellent long-term results.

Is Gastric Bypass surgery suitable to patients with esophageal reflux?

The answer is yes, it is the best choice for obese patients who suffer from esophageal reflux as it is treated after the operation. They don't fit the gastric sleeve.

Choosing the type of operation...is the cornerstone of its success:

The most important step of bariatric surgery is to choose the competent and experienced surgeon who chooses the right operation for your condition and thus achieve the desired result without complications.

Bariatric surgeries are not welfare:

Bariatric surgeries are no longer a luxury as obesity has become the disease of these days, which results in many and many complications, so treating and getting rid of it is an imperative and not a luxury. This is to protect the person from diseases and help him to enjoy life and move freely without difficulty.

Dr. Osama Khalil advises his patients, especially those who have undergone Gastric Bypass surgery, the need to take vitamins and supplements on time to achieve a safe weight loss without complications, and to compensate for the lack of absorption of vitamins and nutrients resulting from the operation.
Recent studies have shown that there is no need to take vitamins for life after a gastric bypass. It is preferable to take it from 3-5 years with the necessary tests and investigations required and prescribed by your doctor.

The Gastric Bypass surgery is called the gold standard because it is one of the oldest bariatric surgeries that has proven to be effective and stable over the years.
It was invented by Robert Rutledge, an American inventor and expert in bariatric surgeries. He invented it in 1997 and began publishing it in 2011 and transferring his experience to various countries of the world.

Pain is one of the most important questions that hinder many obese patients from performing bariatric surgery. Fear of pain is a ghost that haunts many of them. But the truth is quite different. Thanks to modern techniques in bariatric surgery, the pain is very simple and disappears as soon as simple painkillers are taken.
Laparoscopic surgery also contributed a lot to the decrease in the incidence of pain as the operation is performed with very small surgical openings in size unlike traditional surgeries that were performed with a large opening in the abdomen.
Dr. Osama Khalil also uses PCA (Pain Controlled Analgesia) or pain relief device in his surgeries, which is the latest in science to reduce pain after operations.
It is a small device that is installed in the cannula during the operation and continues with the patient for 3-4 days after the operation. It releases specific doses of the analgesic electronically at the click of a button from the patient. The patient can receive a number of doses per day according to the doctor's programming of the device so that he can receive safe doses during the day.

Like any surgery, there is a small percentage of the probability of complications after Gastric Bypass surgery, which is only 1% of the total cases.
These complications include:
1- The possibility of bleeding, which Dr. Osama Khalil avoids in his surgeries using the latest techniques and surgical instruments, also with some injections that prevent bleeding.
2- The possibility of leakage, which Dr. Osama Khalil avoids using the GST system to hold the strongest grip of stomach tissue and thus avoid leakage.
Dr. Osama also performs a leak test inside the operating room to ensure that the operation is completely safe.
3- The possibility of infection of the wound if you do not care about its cleanliness.
4- The possibility of rapid emptying syndrome or Dumping Syndrome.
Nausea, vomiting and sometimes diarrhea, especially after eating, is caused by the very rapid emptying of food from the stomach to the intestines, resulting in some painful symptoms of the stomach.
5- Gastric stretching again as a result of the incompetence to the surgeon instructions and the failure of the patient to comply with the instructions after the operation, especially eating in large quantities more than the stage of satiety, which presses the wall of the stomach and causes an increase in its size again.
6- The possibility of anemia and nutrition defficiency as a result of the patient's lack of commitment to vitamins and supplements after the operation, to compensate for the lack of absorption of sugars and nutrients.

Gastric Bypass... No foreign object is inserted and part of the stomach is removed:

Gastric Bypass surgery is characterized by the non-insertion of any foreign body into the body as it involves making pocket in the stomach while diverting the intestinal tract. Also, no part of the stomach is removed during the operation, only part of the stomach and intestines are excluded while remaining in the body.

Failure of bariatric surgeries is possible if the surgeon is wrongly selected, also if the patient does not comply with postoperative instructions. But is this failure, the end?
We thank the medical development that has always progressed to serve the patient and achieve his comfort, as Redo bariatric processes has become one of the most famous operations now performed in Egypt.
Dr. Osama Khalil has done many success stories from bariatric surgery corrections using a gastric bypass as it is the best choice to modify these processes.
To learn more about Redo bariatric surgery, click here
Read More